By Jay Floyd June 19, 2018
The Lakewood BlueClaws are sending six players to the Class A South Atlantic League All-Star Game, slated to be played on Tuesday evening at 7:05pm at First National Bank Field in Greensboro, NC.

Following the last regular season game of the first half on Sunday, I talked with a pair of those BlueClaws All-Stars, third baseman Jake Scheiner and relief pitcher Addison Russ about representing their team in the mid-season exhibition, among some other things.

Read ahead for quotes galore from this talented twosome. 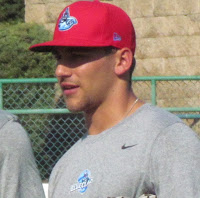 -Some of the offensive guys I've talked to on the team have cited concern over a bit of under-performing at times this season.  Do you feel like you've performed up to personal expectations you may have had coming into the season?

Yeah.  I felt like my numbers didn't show well in the beginning.  But, I stuck with my approach and kept it going and it led me to getting a nominated for the All-Star Game.  I think our whole line up collectively has improved tremendously.  You know, a lot of the guys, their numbers don't show, but I feel confident in our lineup one through nine.

-What does the All-Star nod mean to you?

It's cool.  You set goals before a season and obviously, this is one of your goals and it's a good accomplishment.  But I'm just excited to keep playing.

-You get to go to this game with five teammates.  I've been here over the years and seen a lone pitcher from this team have to go to this thing all by himself.  Does it mean more to be going with so many teammates?

Yeah, it's awesome.  We're gonna have a good time out there.  I feel like we could have had some more pitchers on this (All-Star) team.  You know, just by looking at the numbers.  But that's how it shook out.  I'm excited.  It's gonna be fun.

-Any sort of special travel in place for you guys to get down to Greensboro for the game?

I think we're taking a bus to the airport around 6:30, then we fly down to Greensboro.  Then after the game (on Tuesday), we take a bus with the Columbia players to Columbia and wait for the (rest of the BlueClaws) to me us there.

-What's the vibe you get from the team over the weekend here with the (first half division title) hanging in the balance?

It brings out the good side in all these players.  I feel like we've taken really good at bats throughout the last 10 days and we've competed.  We've had a lot of good games where everybody's into it, everybody's locked in on every pitch and it's exciting.  It's fun to play in.

-How do you feel about the coaches?  Do you feel like they have helped you a lot this year?

Yeah, definitely.  I feel like my defense has improved, trying out two different positions that I've never played before, first (base) and left (field) and they've been helping me a lot with that.

-Is that flattering or meaningful to you when you're approached with a positional switch?  Because obviously they're asking that of you to keep your bat in the lineup and make you more versatile.

Yeah, it's definitely an honor to play a bunch of different positions and if you're in the lineup every day, it's always a good thing.  It's fun. 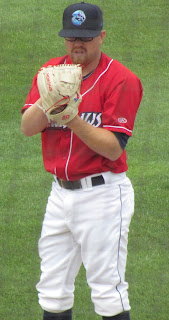 -It's been a big year for you thus far.  Everybody's excited for you, but how do you feel about the season you're having?

I mean, it's good.  Transitioning into the closing role was something new for me this year.  Last year I did more set up work.  So, I was excited to be in the crucial role on the team and I feel like me and (set up guy) Kyle Dohy have kind of done a great job of handling the pressure and rolling with the situation and the punches that are thrown with it.

-What does it mean to you to have this All-Star honor along with Kyle?

I mean, it's a great honor.  I mean the organization that I play for, the Phillies, the BlueClaws and I feel like it's great that I get to represent them in this All-Star Game and hopefully I can go out and do what I've been doing in the first half.

-There's some attention that you get and Kyle gets, but when it comes to the ERA success that the team is growing famous for, the guys on the league leader board are all starters, because of innings requirements.  How happy are you for all these other guys that are having that success?

Oh, it's great.  Any time your team is successful, it's a good thing for you.  Especially having starters that are giving up so little runs that it allows me to come into games and get saves.  I've got 13 saves on the year and the only reason I'm able to get that high of a number is 'cause my starters have minimized damage and they've been excellent.  There's no other words other than that.  They're lights out.

-I've seen a season when the BlueClaws sent only one guy to the All-Star Game.  You guys get to go to this game with a big group.  There's six of you.  Is it more fun to be able to go with so many teammates?

Yeah, I think it's gonna be a lot more fun 'cause we get to role in the with a group.  But, like you said, there's other teams that are gonna come in with one, maybe two guys.  I mean, the fact that four out of our six are pitchers, I mean, we're taking over a big portion of the pitching staff in that All-Star Game.  So, yeah, I definitely think it's going to be more fun as a group than it would be individually.

-I've heard some really good feedback about your pitching coach Brad Bergesen.  He's in his first year as a coach and he's helping you guys achieve all this success.  I've asked guys if he's such a big help because he's only a couple years removed from being on the mound, competing himself, and the guys say yeah, but I don't know if they're just saying yeah because I set it up and asked that.  What can you tell me about him and how he's helped you?

I mean, Bergy, he's the man.  Like you said, I think because he's fresh out of playing he kind of understands how it is to be the player, to take him out everyday.  He knows that it's a grind at times and sometimes you don't feel like you want to go out there, but it's our job and it's what we do.  But, yeah, Berg has helped me multiple ways and I owe a lot of my success to him mechanically and just figuring things out.

-You've has some good sized crowds as the weather's gotten warmer this season.  What do you feel about playing in front of these Lakewood crowds?

Lakewood's a great place to play.  I think it's one of the best stadiums in the league and it's the best fan base that we have.  The fans make it more fun.  Anytime you're playing in front of crowds of four or six thousand people, the adrenaline gets going.  Ninth inning, you hear everyone clapping.  It gets everything going.  I enjoy it a lot.