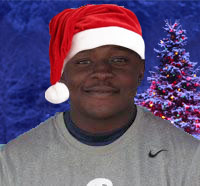 Everybody loves the holidays and, of course, baseball players are no exception. Every year at Christmas time, I survey a group of Phillies prospects about what they get excited for during the holiday season.


- What is your favorite Christmas movie or TV special?

Randolph- Polar Express!  I just like the Christmas kind of vibe that goes to it.  Like, I've been watching it since I was younger.  It was something that me and my mom used to watch.  It's pretty much like a tradition now.

Hoskins- I'm gonna go Christmas Vacation or Elf.  I'd say both of them are absolutely hilarious.  I've probably seen Elf 30 or 40 times.  I just think it's hilarious.

Leftwich- I feel like I gotta go classic with A Christmas Story.  I used to watch that a lot when I was little and I still make a point to watch it every year.  I've probably seen it 50 to 100 times by now.

Morris- I'm gonna have to go with either the original Grinch or the original Rudolph because every year it was something that I would look forward to.


- Do you have a favorite Christmas song?

Randolph- I actually don't have one.

Hoskins- I think the whole Mariah Carey Christmas CD is pretty good.  She's got a good voice.  I enjoy Christmas music and it's good every 12 months.

Leftwich- I've been listening to the Michael Buble Christmas album lately and there's this song on there called Cold December Night and I think it's going to be a classic at some point.  It's a great song.

Morris- I don't know.  Not really.  Once Christmas music's on, I'm in a good mood, so I like all of them, honestly.

Singer- My favorite Christmas song is Bruce Springsteen's version of Santa Claus is Coming to Town.


- What is your favorite food or dish at the holidays and who makes it?

Hoskins- Every Christmas morning my family has a big breakfast and every year my dad makes this egg casserole.  I don't know what is in it, or how he makes it, but we've had it every year that I can remember since I was a little kid.  It's just something that I look forward to on Christmas morning.

Leftwich- Not necessarily anything special to the family of anything, but I'm a big fan of Honeybaked Hams and we always have one on Christmas, so I'd have to go with that.

Morris- Honestly, anything my grandmother makes.  That's where we go on Christmas and just her meals and I don't know what, but they've got something in it.  It might be just be grandmom's love.

Singer- My favorite Christmas meal is my grandparents honey ham.


- Is there any standout Christmas gift that you got from childhood?

Randolph- I think I was about 11 or 12 and my dad got me my first wooden bat.  The story behind that is I saw my brother swinging a wooden bat and I said, "Oh, dad.  I want one!"  And he was like, "What's reason of swinging a wooden bat?" And I could never figure that out.  And he said, "Before I get you that bat, I want you to tell me the reason."  And, so, I asked my brother and my brother would never tell me.  And I finally figured it out and it's to learn the sweet spot.  So, when I finally figured it out, for Christmas he got me my first wooden bat.  So, that was probably the most significant gift I ever  got.

(I asked Rhys a follow up, inquiring if he had the MVP Baseball EA Sports games and if he would create himself as a player in those games.)

Leftwich- I feel like this is really cliche of me to say this, but when I was in elementary school, my parent got me a bike and I'm pretty sure I didn't get off of that bike for the next three weeks straight.  I was riding around, thinking I was the coolest kid in town.  It was great.

Morris- Not that I can think of.  Maybe because I'm a big gamer, XBox.  I remember when I was 13 or somewhere around there, when I got the original XBox for Christmas, that took up 90% of my childhood.  I was glued to my TV in my room and I would never put that thing down.  That still affects me today.  I still get addicted to Call of Duty and other games now.

Singer-  Best present I got was more of a family gift and it was our Golden Retriever named Holly.


- Do you remember finding out the truth about Santa Claus?

Valentin- I did but I forgot when it was.  Probably I was around 11 and I knew 'cause I saw all the presents in my parents' bathroom.

Hoskins- Um, I still believe in Santa.  No, I don't remember finding out the truth.  I think one year I was snooping around and me and my sister didn't really know why the presents were there.  I don't think our parents ever told us explicitly.  I think we just figured it out.

Leftwich- One year me and my siblings got Razor scooters for Christmas from Santa and we were riding them and I had to go to I believe it was soccer practice that day and I went to go put my stuff in the trunk and I was all the boxes of the Razor scooters and I was like, "How did Santa give my parents these boxes?"  So, then, I asked my dad and I guess he knew I was old enough to tell me.  He told me, but he told me not to tell my siblings because they were a little bit younger.  So, I got to be in on the secret for a couple years.

Morris- Yes, I had a friend who had older siblings.  I want to say I was six years old.  I was young.  I don't know.  And he told us one day at school and I wanted to hit him in the face.  I wasn't a very mean kid, but he made me mean that day.  I went home and I just looked at my parents and I said, "Is Santa Claus real?"  I don't remember their reaction, but I remember that kid at school, Tyler.  He told everyone at the lunch table and it pissed everybody off and I was probably the maddest six year old in the state of Maryland.  And then my parents, I don't think they did a very good job of defending themselves.  I think I was very pissed off that Christmas.


- Do you and your family have Phillies ornaments on the Christmas tree?

Randolph- Yes, my mom has become a really big Phillies fan, so she put those on the Christmas.

Leftwich- Yeah, my grandma definitely has one and my parents got one last year too.  So, I think in family houses, we're two for two on Phillies ornaments.


Also, check out previous editions of the holiday survey with the likes of Aaron Nola, Cody Asche, Cameron Rupp, Darin Ruf and others sharing all their Christmastime favorites by clicking the following links- 2015 survey, 2014 survey, 2013 edition, 2012 edition, 2011 edition and 2010 edition. Happy holidays to all of you.