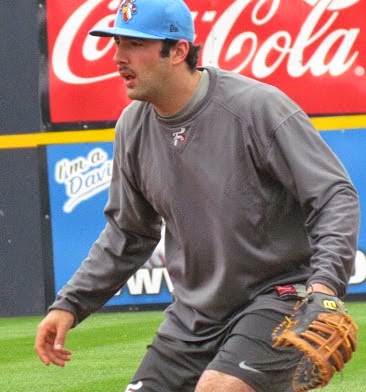 First baseman/designated hitter Chris Serritella joined the Phillies as the team's 4th round draft selection in 2012. Since then, the lefty batting Southern Illinois University product has had some ups and downs, but he's working hard to improve his game.

After debuting as a pro in his draft year with Class A short-season Williamsport, the six-foot-three 205-pounder impressed, posting a .297 average with six homers and a league leading 47 RBI. Serritella followed up that great effort with a more modest campaign with Class A Advanced Clearwater in 2013. In 126 games with the Threshers, the 24-year-old tallied a .247 average with 12 home runs and 53 RBI.

This season, Serritella has struggled as a member of the Double-A Fightins, as he's batting .186 with two home runs and seven RBI in 35 games.

Recently, I spoke with Chris about his production this year, his roommates, getting drafted by the Phillies and plenty more. Read ahead for that full interview.


-Just looking at your stats, it's been a slow start for you in 2014. What can you tell me about your season thus far?

Yeah, a slow start for me, but I feel good at the plate and I'm working on a couple things with (hitting coach Rob) Ducey during BP and stuff, so I think it's just a matter of time till I start seeing results in the field and I'm just taking it day by day and, hopefully, I'll start putting together some better at bats here.

-You were an early round draft pick two years ago. What was your draft experience like?  How did you track the draft and how did you celebrate?

That was definitely a fun day for me. Looking back on it, I can remember just sitting in front of the computer, watching the draft go by, which I was advised not to do. And it kind of made me go crazy, but, I got a call from Dave Seifert, a scout with the Phillies, and he told me they wanted to pick me up late in the 4th round. I was all-hands-on-deck. I was really excited, once I got the phone call, so later that day I signed the contract. I just remember a lot of madness that day. The phone never stopped ringing and stuff like that. So, definitely a fun day for me and a fun process overall.

-Was it a surprise that the Phillies selected you or did you know you were really on their radar?

You know, it was surprising, because I talked to Dave, the scout, a lot the first month of the season and I didn't hear from him ever again, so I was like, "Oh, I guess Philadelphia's not a team for me." I thought maybe Seattle or Detroit was high on me. The Phillies came out of left field a little bit, but luckily, I'm excited to be a Phillie and I'm working every day and we'll see how it goes.

-You mentioned being excited to be a Phillie. Playing locally, the Reading team will get a lot of support even on the road in a town like Trenton. Did that catch you by surprise, all the support for a road series?

I was definitely surprised. On the bus ride (there), some of the guys were talking about how there's going to be more Phillies fans than Yankees fans and it's funny when you look outside the dugout, all you see is red and it's like you're playing a home series, almost.

The support's great. I know Philly's close by, so the Phillies get a lot of great fan support and it definitely shows in Trenton.

-The Reading team has a really good vibe this year. There's a lot of positivity throughout the clubhouse. Is that something that can help you guys throughout the long season?

Definitely. I think we all know we have a good club here. We started off really hot and kind of slowed down a little bit, but it's a long season and you go through these stretches, but we've got a veteran club here and we all realize that and we all know what kind of potential we have. I think one through nine, we've got really good hitters and starting pitching's great and our bullpen was doing phenomenal for a little bit there. But, it's a long season and we're doing work everyday.

-Who are you rooming with this year and do you guys have any hobbies as a group to pass the time when you're not at the field?

I'm living with Carlos Alonso and Brock Stassi right now and hobbies wise, it's kind of tough because we're at the field day and night, so, I guess, on our days off we just try to lounge around. Nothing too exciting. We're at the field from 11 to 10.

-I know Perci Garner and Austin Wright are big into video games. You guys don't get into that, like those guys?

We have an X-Box in the apartment, (but we're) not as big as Perci and Austin. Those guys are hardcore gamers. But, we watch a lot of movies. We're big on Netflix and we kind of just hang out and lounge around, because we're always so tired after a day at the field.

-I wanted to also ask you here, who were some of your favorite players to watch before you turned pro?

For me, I was a big Cubs fan. I always watched the Cubs, being from Chicago, and growing up, Sammy Sosa was big with the home run hop and I liked Derek Lee because I was a first baseman and I watched him a lot. Those two were probably my favorite. And, actually, I used to be a pitcher, so I liked Mark Prior a lot and Kerry Wood and those guys. But, being a Cubs fan, it was easy to root for those guys.

-Do you have any superstitions or good luck charms for game day?

The one thing I am superstitious about is if I have a good game, I'll try to do the same thing. Whether it's facial hair wise or whatever it is, but no big routines or anything like that.

-If you had the chance to give advice to young players that were hoping to play baseball beyond high school, whether it was in college or the pro's, what would you tell those youngsters?

I'd just say keep working hard. I was always loved the game and I was always begging my dad, "Let's go hit. Let's go take some flips. Let's go throw a bullpen", or whatever it was. But, just keep working hard and if your dream is to play professional baseball one day, go pursue it. Don't let anything hold you back. Just- work ethic's big with me. I think if you work hard, everything will pan out.