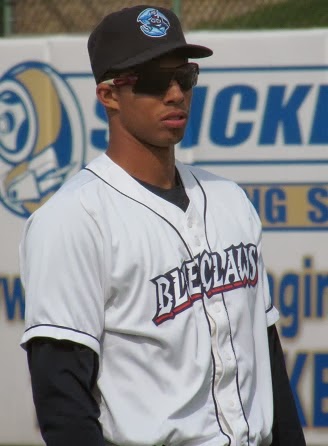 Aaron Altherr has long been praised for his on-field skills and this upcoming season may provide the evidence that many are looking for to see if he truly has what it takes to be a top prospect.

A righty hitting outfielder that stands six-foot-five and weighs around 195 pounds, Altherr was selected by the Phillies in the 9th round of the 2009 draft and debuted as a pro that year with the rookie level Gulf Coast League Phillies.  In 28 games there, he batted .214 with a homer and 11 RBI while swiping six bags.

The following year, he spent time with the GCL team and earned a promotion to the Class A short-season Williamsport Crosscutters.  In 55 total games in 2010, Altherr batted .297 with a home run, 25 RBI and 12 stolen bases.

In 2011, Altherr began the season with Class A full season Lakewood, where he struggled as a 20-year-old, posting a .211/.272/.272 line in 41 games.  The concerning output got Altherr demoted, but he bounced back in a return to Williamsport, earning himself a spot as a New York-Penn League All-Star.  His .260 average with five home runs, 31 RBI and 25 steals in 71 games were impressive.

Returning to Lakewood in 2012, Altherr showed that he could handle that level and became one of the club's most dependable offensive threats, batting .252 with 27 doubles, six triples, eight home runs, 50 RBI and 25 stolen bases in 110 games.

Recognized as an All-Star with the Class A advanced Clearwater Threshers last year, the youngster sported a .275 average with 36 doubles, six triples, 12 homers, 69 RBI and 23 stolen bases.  Altherr's approach at the plate was clearly improved as the season went on as well in 2013, showing an ability to be selective and draw walks.  His career high OPS of .792 showed progress with the bat as well.

This past off-season, Altherr would play for Peoria in the highly competitive Arizona Fall League.  In 12 games there, the Arizona resident tallied a .200 batting average with three doubles, three RBI and two steals.

Pitch recognition will be an area that Altherr must focus on, as it is for many minor league batters.  His strike out rate of 26.6% with Clearwater last year was nearly five full percentage points higher than his mark the previous season.  That trend has to improve.

Born in Germany to a military family, Altherr, who is a self-described contact hitter, drives the ball to the gaps and loves to cause trouble for the other team on the bases.  Altherr is very quick and is a steady stolen base threat.  He sports an outstanding 83% success rate in steal attempts over the past three seasons.

Having played shortstop at Agua Fria High School in Arizona, the Phillies considered switching Altherr to third base in 2011, and he worked out there, but the move didn't stick and he returned to the outfield.

On defense, Altherr has very good instincts and glides to the ball with superior range.  His arm keeps aggressive runners honest.  Altherr's time in the field last season was split between center field and left field, although he's played several games in right field in the minors as well.

The 23-year-old may be primed to be the breakout prospect that helps the organization discontinue its trouble with high-ceiling "toolsy" types that haven't locked themselves in as quality prospects.

His tools (speed, athleticism, power) will be what makes Altherr a contributor for the Double-A Reading Fightin Phillies, as the organization expects to assign him there to begin the 2014 season.  There, in the Eastern league, Altherr will be tested and get the chance to compete against the type of talent that presented quite a challenge for him in the AFL last autumn.  He'll be playing at the level that often separates the men from the boys, as the saying goes, and Altherr will welcome the challenge.