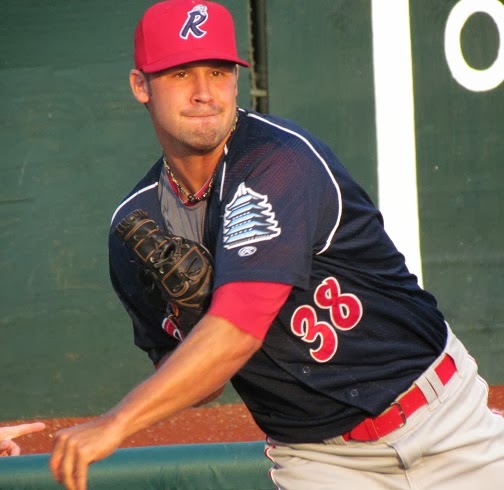 Drafted in the third round in 2011 out of the University of Alabama, left-hander Adam Morgan quickly made an impact in the Phillies' system upon debuting as a pro.  However, a shoulder injury last year that kept him out of action for a lengthy stretch and resulted in off-season surgery has reduced his value as a prospect in the eyes of many.

In 2011, Morgan looked great, tallying a 3-3 record with a 2.01 ERA and a .206 batting average against in 11 starts as a member of the short-season Class A Williamsport Crosscutters.

Morgan would go on to skip full season Class A Lakewood and began the 2012 season with the Class A Advanced Clearwater Threshers.  In the Florida State League, the Marietta, GA native tallied a 4-10 record with a 3.29 ERA and was named a mid-season All-Star. he earned a promotion to Double-A Reading after July and helped them reach the Eastern League playoffs, posting a 4-1 record along with a 3.53 ERA in six regular season starts.

Last season with the IronPigs, after eight outings, Morgan had a 1-4 record along with a 4.97 ERA and a .283 batting average against when he experienced shoulder discomfort and went out of action.  Following some time on the shelf and a pair of rehab appearances with the Gulf Coast League Phillies, Morgan posted an outstanding 1.59 ERA through his first seven starts after returning to the Lehigh Valley rotation, before he wrapped up his season with a troubling outing in which he allowed four earned runs in 1 1/3 innings.

Morgan's time working through physical rehab led to the discovery of what he described to me as "some hitches" that weren't helping him maintain a healthy throwing shoulder, so minor adjustments were made to his mechanics to improve his approach on the mound.

After beginning an off-season throwing program late last year, a physical setback that popped up and further evaluation from Phillies team doctors led to surgery to repair his left shoulder.  The team expects Morgan to miss the majority of the 2014 season.

Despite the missed time and the injury, Morgan, who turns 24 years old before the end of this month, sees the positives from his 2013 season, having started his second full season in the minors at the Triple-A level and proving that he could compete at that level in the International League against some very talented prospects and plenty of players that have big league service time.

IronPigs manager Dave Brundage agrees that Morgan benefited a considerable amount from last season, pointing out to me late last season that the lessons of learning how to pitch without being at full strength and without your best stuff as well as what it takes to come back from injuries will help the youngster in the long run.

A solid ability to locate his pitches enables Morgan to get ahead of the opposition, although working around some shortcomings with his shoulder health last year resulted in a spike in his walk rate from 6.2% in 2012 to 7.3% in 2013.

Morgan also saw a drop in his K/9 mark last year, striking out 6.55 per nine innings, while he previously averaged a remarkable 10.29 strike outs per nine innings a year prior.

A very goal oriented individual, Morgan views his father, Wiley, as his hero.  Dating back to 5th grade, Adam wanted to be just like the elder Morgan and proclaimed at a young age that he would some day pitch for Alabama, just like his father had done. Showing with that achievement that he can do whatever he sets his mind to, Morgan has barely started accomplishing everything he wishes to do on the baseball diamond.

Morgan sports a repertoire that includes a solid low-90's fastball which features nice movement, a great change up that scouts have raved about, an excellent slider that he uses to attack opposing batters when he is ahead in the count and a curve ball that he's made some improvements with.

Physically, Morgan, who stands six-foot-one and weighs 195 pounds, doesn't project to change much.  Skills wise, the talented hurler may have a ceiling as a back-end big league starter.

Once Morgan is ready to return to the mound, which should occur before the end of the regular season if things progress well, expect him to get some rehab appearances with the rookie level GCL team or the Threshers to allow him to stay under the close supervision of Phillies trainers and staff in Clearwater.  Once his full health is established, a return to Triple-A would be suitable.