Please visit Patreon.com/PhoulBallz in order to support my work and get access to material like this before anyone.  Plus you'll get interviews as well as other exclusive content you won't be able to enjoy anywhere else.

At a valued position, backstop Rafael Marchan is one of the Phillies' most valued prospects as he has built a reputation as an intelligent and physically talented player.

Signed in the same off-season that the Phils dished out a $4 million signing bonus to outfielder Jhailyn Ortiz, Marchan inked a deal for a reported bargain price of $200,000, as a 16-year-old in 2015.He made his professional debut in the Dominican Summer League in 2016, posting a .333 average with seven doubles, a triple and 34 RBI in 44 games.In 2017, Marchan tallying a .238/.290/.298 slash line in 30 games in the short-season Rookie level Gulf Coast League. 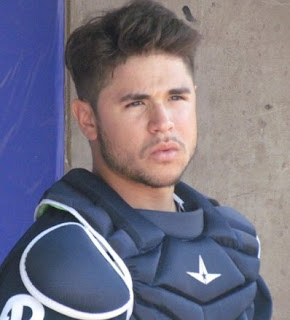 The following year as a 19-year-old, the Venezuela native played with Class A short-season Williamsport and began making a name for himself.  In 51 games there, Marchan notched a .301 average with eight doubles, two triples, 12 RBI and nine stolen bases.  He was named a New York-Penn League All-Star for his efforts.In 2019 Marchan played much of the season with Class A Lakewood.  In 63 games, he posted a .271 batting average with 16 doubles and 20 RBI.  He would miss a few weeks with an injury in May, but bounced back to complete the season, earning a promotion to Class A Advanced Clearwater at the end of July.As a member of the Threshers, the five-foot-nine 170-pounder batted .231 with four doubles and three RBI in 22 games.Splits would show plenty of room to improve for the switch-hitting Marchan.  He was 0-for-8 from the right side while with Clearwater and OPS'd over 200 points lower (.739 as a LHB vs .535 as a RHB) from that side with Lakewood.  Last year, the Phillies needed to fill a void when starting catcher J.T. Realmuto suffered a hip injury.  Marchan joined the team from their alternate training site and went 4-for-8 with a home run and three RBI in three major league games.
Generally, Marchan possesses a line-drive approach with minimal power.  However, he has displayed advancements with an ability to make adjustments in the box, evidence of becoming a smarter hitter. Defensively, Marchan is a standout.  He has a strong arm with a quick release, he blocks balls well and he displays solid footwork.  With an outstanding knack for calling games, pitchers really like throwing to Marchan.  This side of his game was what punched his ticket to Philadelphia last year.  He had been a shortstop before signing with the Phillies, though he hasn't played any position besides catcher since coming to the States.Coaches describe him as toolsy and athletic with big upside.  He's also made fans out of developmental personnel based on standing out with his leadership qualities, especially among his fellow Latin players.Speed won't be a featured part of Marchan's game, but I also don't think he'll be a detriment to his team on the bases either.  Plenty of catchers happen to run like catchers. The 22-year-old's ceiling could very well be an everyday big league catcher.  Look for him to open the 2021 season with Double-A Reading.
You can keep tabs on this year's Phillies prospects countdown by clicking on this link.