Please visit Patreon.com/PhoulBallz in order to support my work and get access to material like this before anyone.  Plus you'll get interviews as well as other exclusive content you won't be able to enjoy anywhere else.  I could use, and I would value, your backing. 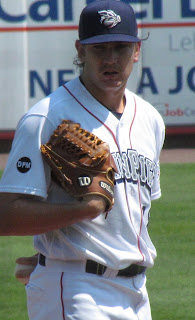 Left-handed pitcher Damon Jones used an exceptional 2019 season to catapult himself toward the top of the list of names being discussed as top options to help the Phillies' pitching pitching staff.

An 18th round draft selection in 2017, out of Washington State, Jones began his professional career as a member of the short-season Class A Williamsport Crosscutters.  In 13 appearances, all in relief, that season, the six-foot-five 238-pounder notched a 2-3 record with three saves, a 4.85 ERA, a .240 batting average against and a 13.2 K/9 mark.

In 2019, Jones opened the year with a stretch that earned him a promotion and loads of regard as a true up-and-comer for the Phils organization.  With Class A Advanced Clearwater, Jones would post a 4-3 record with a 1.54 ERA and a .188 batting average against in 11 starts.  He moved up Double-A Reading and made a splash in that rotation as well.  In four starts, Jones sported a 1-0 record, a 0.82 ERA and a .129 batting average against.

He would move upward a second time in mid-July, making his final eight starts of the regular season with Triple-A Lehigh Valley.  The statistical production came back down to Earth a bit there, as it took longer for Jones to adjust to the highest level of the minor leagues.  He would notch a 0-1 record with a 6.62 ERA, a 1.56 WHIP and a .214 batting average against as a member of the IronPigs.

Jones continued to deliver standout strike out numbers throughout the full season in 2019, as he posted a 12.0 K/9 mark.


Last year, before the pandemic upended the baseball season, Jones made a pair of scoreless appearances with the Phillies in spring training.

Despite looking like a power pitcher with considerable K rates, Jones uses his fastball, that reached 99 MPH in off-season workouts, to induce plenty of ground ball outs.  His strong curve ball is the out pitch that garners most of the strike outs for the big man.  He also possesses a slider that has good, horizontal movement and a change up that remains a work in progress, as he tries to refine it.

In May of 2019, Jones described to me how working his fastball to the inside and the outside against opposing batters was changing the look they were getting and helped him keep hitters off of his breaking pitches and his change up.

Command is a big positive for Jones.  It's a part of his game that impresses Phillies developmental staffers the most.

Jones is a member of the Phillies 40-man roster.  He'll be in the mix this year to earn a role with the big league team out of spring training.

The ceiling for Jones, 26, has been projected to be a big league starter.  My usual age cutoff for these rankings is 25, but my feeling is that Jones would have reached the big leagues last year if there was a complete season and he remains on the verge of doing so.  As such, he stays on my list this year due to his proximity to making an impact in the majors.

You can keep tabs on this year's Phillies prospects countdown by clicking on this link.