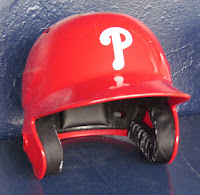 On Monday the Phillies will open up a home-and-home four-game series against the Yankees, with the first pair taking place in Philadelphia and the last pair happening in New York City.

After dropping two of three in their season opening series against the Marlins, the Phils look to bounce back and get on the winning track.

New Phillies skipper Joe Girardi managed the Yankees for a decade, winning a World Series title against the Phils in 2009.

Two days shy of the 10-year anniversary of the day the Phillies traded him to Houston in the Roy Oswalt deal, J.A. Happ will start the series opener against veteran Jake Arrieta.

Read ahead for breakdowns of the pitching match ups and other key stats from this series.

In 37 games at Yankee Stadium last season, Didi Gregorius posted a .196 batting average.  Gregorius is 2-for-20 (.100 avg) in his career against Happ.

First baseman Rhys Hoskins batted .208 in 80 road games last season.  Hoskins is 2-for-12 with a homer in three career games against the Yankees.

In 24 career games against the Yankees OF Jay Bruce has a .103 batting average with a home run.  Bruce has a .098 average in 14 games at Yankee Stadium.