The latest from the off-season: Fall/winter ball stats and more 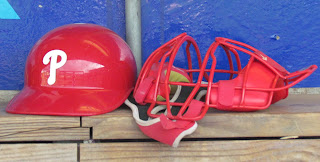 Over the off-season, sometimes this site can go stretches of several days without a post or an update, but if you're looking for constant news, stats and insight on what is taking place with Phillies developmental talents throughout the autumn and winter months, follow me on Twitter or simply bookmark my Twitter profile page (https://twitter.com/PhoulBallz) to get daily alerts and details.

In the Dominican Winter League thus far, catcher Deivy Grullon and shortstop Malquin Canelo have each posted a .143 batting average in four games for their respective teams.

In the Arizona Fall League, where Phils prospects are playing for the Scottsdale Scorpions, corner infielder Alec Bohm is sporting a .361 batting average with a pair of homers, nine RBI and five walks in 19 contests.

In eight appearances left-hander JoJo Romero has posted a 1-0 record, a 0.84 ERA and a .158 batting average against with the Scorpions.

Through four starts righty Connor Seabold is 1-0 with a 1.06 ERA while striking out 22 and walking three over 17 innings pitched.

Infielder Jose Gomez is batting .091 with an RBI in six games since joining Scottsdale as a replacement for Nick Maton who left the team weeks ago for an undisclosed reason.

In 10 games outfielder Josh Stephen is batting .212 with a triples and two RBI.

Lefty reliever Zach Warren has no decisions, a save, a 3.86 ERA and a .063 batting average against in five outings.

News out of Philadelphia on Thursday saw Joe Girardi being named as the Phillies' new big league managers.  For an exclusive look at what some players think of the decision, support my work over on Patreon.com/PhoulBallz.  $5 membership there comes with plenty of content that is not available anyplace else.