By Jay Floyd March 06, 2016
Thanks to the always-highly-touted-by-PhoulBallz baseball blogger Baseball Betsy, this weekend we got a firm look at the Phillies' workout groups at the start of minor league camp. 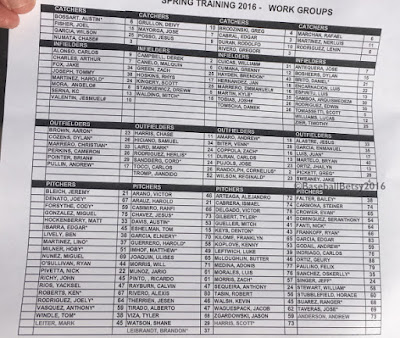 The group listings will change throughout spring as certain players move down from big league camp and others are simply released.

Noteworthy among the initial groupings are outfielder Jhailyn Ortiz with the 4th group as well as the returns of outfielder Samuel Hiciano and infielder Carlos Alonso.

Ortiz, a Dominican native, was a big international signing last year.  The Phils invested $4 million in the powerful teenage outfielder last summer.  He was ranked among the top international free agents by MLB.com in 2015.

Hiciano, a 22-year-old Dominican, missed the entire 2015 campaign after injuring his ankle with three days left in spring training last year.  He has posted a .262/.327/.428 slash line in three seasons at three levels.

Alonso underwent season-ending left knee surgery early last season as a member of the Double-A Reading Fightins.  The 28-year-old University of Delaware product is now back at full health.

If you don't already follow Betsy on Twitter, make sure you do so, in order to have access to a tremendous source of baseball news out of Florida throughout the entire season, not just during spring training.