By Jay Floyd November 09, 2014
This week's rundown includes details on some Phillies players making their off-season league debuts including Ethan Martin, Cesar Hernandez as well as outfield prospect Dylan Cozens along with updates on key names such as Jesse Biddle, Maikel Franco and Aaron Altherr. Read ahead for all your fall/winter league updates from around the globe.

Lefty pitcher Jesse Biddle had an alarming outing with Mayaguez on Saturday, allowing seven earned runs on seven hits in 2 1/3 innings while striking out four and walking two. The 23-year-old sports a 15.19 ERA in two outings in Puerto Rico. Biddle, the Phils' top draft pick in 2010, posted a 5-10 record with a 4.58 ERA in 19 starts in the minors this year.

Also with Mayaguez, Jesmuel Valentin, who was acquired from the Dodgers by the Phils in the Roberto Hernandez trade this year, is 2-for-7 with an RBI in five games. The 20-year-old infielder posted a .273/.341/.412 slash line in 120 minor league games this year.

Emmanuel Marrero is 0-for-1 in two games for Santurce. The 21-year-old switch-hitting infielder posted a .214/.272/.279 slash like in 60 games with short-season Class A Williamsport this year.

Righty hurler Ethan Martin made his VWL debut this week, throwing two scoreless frames while allowing one hit and striking out one for La Guaira. The 25-year-old allowed two earned runs in four innings with the big league club and sported a 3.93 ERA in 32 games in the minors this year. Martin was acquired from the Dodgers in the Shane Victorino trade in 2012.

Outfielder Cam Perkins, through eight games with La Guaira, posted a .292 average with a triple and an RBI. Perkins last played on October 29th and was slated to be on the restricted list for a minimum of 14 days as he reportedly returned to the United States for some time. In 126 combined games at Double-A and Triple-A this year, the 6th round draft pick from 2012 posted a .271 average with five homers and 51 RBI while swiping eight bags.

Freddy Galvis is batting .305 with a homer and seven RBI through 14 games also with Zulia. In 43 big league contests this year, the switch-hitting infielder, who turns 26 years old this month, batted .176 with four home runs and 12 RBI.

With Zulia, first baseman/outfielder Wilmer Oberto is batting .219 with an RBI in 15 games played. Oberto, 22, split time this season between Class A full season Lakewood and short-season A level Williamsport, posting a .226/.301/.355 slash line in 75 total games.

Lino Martinez has allowed two earned runs in 4 1/3 innings (4.15 ERA) while striking out three and walking one for Zulia. The 22-year-old left-hander posted a 0-6 record with a 5.32 ERA in 37 appearances with Class A Advanced Clearwater this past season.

Right-handed pitcher Alexis Rivero has a 7.71 ERA in three appearances for Araguas. Rivero last pitched on October 20th. The 20-year-old native Venezuelan tallied a 2-0 record with one save and a 2.62 ERA in 12 games for the rookie level Gulf Coast League Phillies this year.

Infielder William Cuicas has had one at bat without a hit in two games played for Aragua. The 19-year-old posted a .310/.433/.431 slash line this year for the GCL Phillies.

Also with Aragua, outfielder Herlis Rodriguez has no hits in two at bats in four games played. The 20-year-old lefty batter posted a .260 average with five RBI in 28 combined games at three lower levels this past season.

Infielder Cesar Hernandez made his VWL debut this week, going 4-for-11 with two RBI in three games for Lara. In 66 games with the Phillies this year, the 24-year-old batted .237 with a homer, four RBI and a stolen base.

Catcher Gabriel Lino is batting .278 with two doubles, a walk and three RBI in nine games for Lara. The 21-year-old, who was acquired from Baltimore in the 2012 Jim Thome trade, played in 90 combined games with Class A Lakewood and Class A Advanced Clearwater this year, posting a combined .215 average with five home runs and 34 RBI.

In four games started, lefty pitcher Cesar Jimenez has a 1-2 record with a 3.93 ERA in five starts for Lara. Jimenez has struck out 18 while walking four in 18 1/3 innings. The 29-year-old posted a 1.69 ERA in 16 big league games with the Phillies this year. 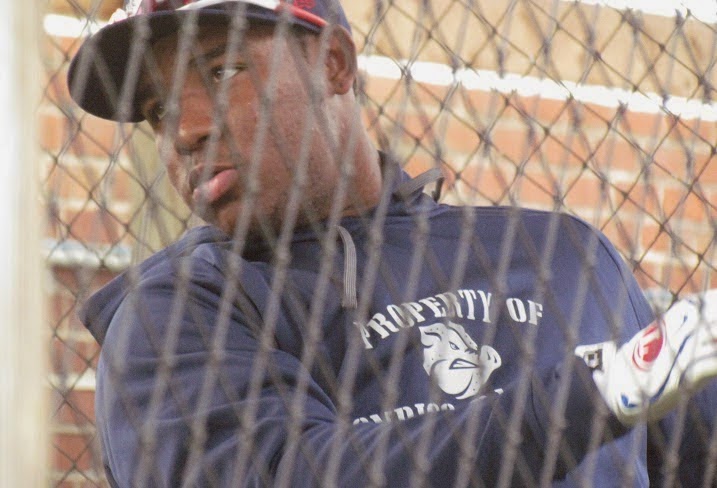 Third baseman Maikel Franco is batting .333 with two home runs and 11 RBI in 10 games with Cibao. The 22-year-old made his big league debut this year, tallying a .179 batting average with five RBI in 16 games for the Phillies.

Outfielder/first baseman Darin Ruf was released by Licey after batting .167 with a home run and two RBI in 11 games. The 28-year-old posted a .235 average with three home runs and eight RBI in 52 big league games this year.

Righty pitcher Hector Neris has tossed seven scoreless appearances (5 2/3 total innings) for Este. The 25-year-old earned a win in his big league debut, his lone MLB appearance, with the Phils this year.

Outfielder Roman Quinn is batting .250 with two triples, a home run, seven RBI and 14 stolen bases in 21 games played. The 21-year-old bounced back from surgery to repair a ruptured Achilles tendon this year, posting a .257/.343/.370 line in 88 games for Class A Advanced Clearwater. Quinn was the Phils' 2nd round draft pick in 2011.

Catcher Logan Moore is batting .147 with a double and three RBI for the Scorpions. In 91 games combined between Class A Advanced Clearwater and Double-A Reading, Moore posted a .227 average with four homers and 28 RBI this season. The 24-year-old was a ninth round draft choice by the Phillies in 2011.

Lefty pitcher Adam Morgan has a 1-2 record and a 6.61 ERA with 11 strike outs and three walks in six appearance. The 24-year-old returned to official action in the AFL after missing the entire 2014 regular season following shoulder surgery. Morgan was the Phils' 3rd round pick in 2011.

In nine appearances, righty reliever Nefi Ogando has a 1-0 record with three saves, a 3.55 ERA while striking out 12 and walking four in 12 2/3 innings. The 25-year-old, who the Phillies acquired from Boston for John McDonald last year posted a 5-1 record with seven saves and a 6.27 ERA in 48 relief appearances for Reading in 2014.

Right-handed pitcher Ryan O'Sullivan is 0-2 with an 11.08 ERA in eight appearances for the Scorpions. The 24-year-old was acquired as the player to be named later from the Dodgers for Joe Blanton in 2012.

Victor Arano, who the Phils acquired from the Dodgers as the player to be named later in the Roberto Hernandez deal this year, has a 6.35 ERA with four strike outs and no walks issued in 5 2/3 innings for Obregon. In 22 games for Great Lakes of the Class A Midwest League this past season, the 19-year-old posted a 4-7 record with three saves, a 4.08 ERA and an 8.69 K/9 mark.

Chace Numata is 4-for-13 (.308 avg) with a double and an RBI in three games for Melbourne. The 22-year-old catcher missed much of 2014 after having surgery to repair triangular fibrocartilage in his left wrist.

Outfielder Dylan Cozens had a rough games on Saturday for Melbourne, going 0-for-5 with five strike outs. Overall, the 20-year-old 3-for-15 with a home run and two RBI in three games. With Lakewood this year, the Phillies' 2nd round pick from 2012 posted a .248 average with 16 home runs and 62 RBI.

Third baseman Mitch Walding is 2-for-14 (.143 avg) with two walks through four games with Canberra. The 22-year-old batted .237 with seven home runs and 55 RBI in 108 games for Lakewood this year. Walding was the Phillies' 5th round draft choice in 2011.