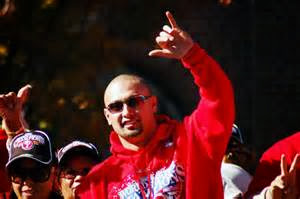 On Halloween day 2008, the Phillies celebrated their second world championship with a parade that drew hundreds of thousands to the streets of Philadelphia. Five years later, a former Phils outfielder has won another World Series. This time Shane Victorino has won it all with another team, the Boston Red Sox.

The 32-year-old is tied for the Phillies' all-time postseason lead in hits with 47 and had at least a couple massive hits to help contribute to Boston's third title run in ten years.

Victorino was featured in a segment of Alaska State Troopers on the National Geographic Channel this week. What better way could there be to celebrate being a World Series hero than to ride along with the po-po?

To see the clip of Victorino's time in the squad car, check out the media player below. Additionally, to listen to my insider tales about Shane's rehab time in the minors during the 2011 season, which includes details on his inappropriate chats with teenage bat boys, his insulting responses to my questions and his aggressively mean reply to a young female fan, listen to the 13th edition of the PhoulBallz Minor League Podcast by clicking HERE.