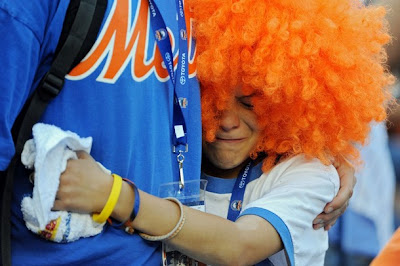 The Phillies are 2008 NL East Division Champions! Maybe you've heard that already, though.

Phormer Phillie Wes Helms hit a homerun on Sunday, for the Marlins, that ended the Metropolitans' season. I like it when that happens.

Brett Myers promised that the Phillies will not go "3 and out" this post season. I would like it if that happened.

TBS and/or MLB have switched the Phillies game 2 of the division series to a 6pm start time on Thursday. Wednesday's game one is slated for 3pm.

No huge pep rally in center city for the Phillies this year. Out of respect for Philadelphia police officer, Patrick McDonald, who was killed last week while on duty, the Phillies have elected to not burden the police dept. with additional duties this week. McDonald's wake and funeral will take place Monday and Tuesday. A smaller event will take place beginning 3 hours prior to game 1, on Citizens Bank Way. Details are forthcoming.