Morales could climb fast after move to 'pen 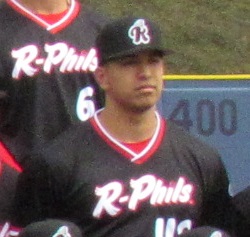 READING, PA- A new role could have Francisco Morales on the fast track to the Phillies' bullpen.

After experiencing limited success last year primarily as a starter, the organization has decided to utilize the 22-year-old strictly as a reliever moving forward.

Signed by the Phils in 2016 at the age of 16 for a reported $900,000, the Venezuela native has spent roughly six years showing flashes of the hurler that he could be.  The new assignment could finally be the factor that makes it happen.

According to Double-A Reading manager Shawn Williams, the talented Venezuelan is excited for the refined duties.

"I think he's always wanted to be a reliever," Williams shared.  "He loves it.  He's looking forward to it.  He had a great spring training as a reliever, closing (and as) a late inning guy."

He closed out the 2021 campaign with two starts for Triple-A Lehigh Valley, going 0-1 while allowing four earned runs, striking out seven, walking seven and hitting three batters in 8 2/3 innings.

Concerns with the progress on his change up likely made the decision to limit his repertoire to just his blazing fastball and his exceptional slider an easy one.  Of course, pitchers with a two-pitch menu are best suited for relief work.

From the sound of things, Morales has impressed the club and he could ascend swiftly.

"Things can happen quick.  They could go (to the big leagues) straight from here.  Things have happened the past couple years, like (Matt) Vierling, he wasn't in (Triple-A) Lehigh (Valley) very long or I know when we had J.D. Hammer here, he went to Lehigh for one outing and then he was in the big leagues.  That's what's so awesome about being here in Double-A, things happen quickly," Williams said.

Stopping short of comparing the two individuals, Williams asserted that the switch for Morales reminded him of the one that Phillies hurler Seranthony Dominguez made heading into the 2018 season that landed him in the majors before the second week of May that year.

"Once Seranthony went to the 'pen, that was pretty darn good too," Williams stated.  "We'll see.  He's headed in the right direction, and he had a great spring training."

His duties with Reading are expected to primarily be late inning or high-pressure spots.  The Reading skipper also thinks Morales could go multiple innings at times.

The outlook is promising, as the Phillies want to help the right-hander reach his potential.

"It could be really special." Williams professed.

Reading opens its season on Friday, as they host the Yankees affiliate Somerset at 6:45 PM.