Phillies' Bohm among finalists for Rookie of the Year Award 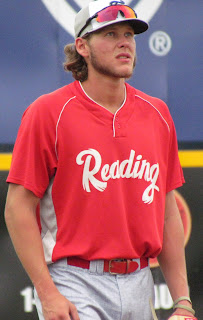 In news that likely surprised nobody, Major League Baseball announced on Tuesday that Phillies first baseman/third baseman Alec Bohm is among the finalists for this year's National League Rookie of the Year Award.

Bohm, who entered the 2020 season as the Phillies top-ranked offensive prospect, performed extremely well following his promotion to the big league's from the club's alternate training site.  In 44 games the 24-year-old tallied a .338 batting average with four home runs and 23 RBI.  The average and RBI total ranked first among all NL rookies, as did his on base percentage (.400), slugging percentage (.481) and hits total (54).

Impressive in clutch situations, Bohm notched a .452 batting average with runners in scoring position, which was best in baseball.  Even more outstanding, the talented youngster struck out just four times in those situations.

The six-foot-five 225 pounder was the Phils' first round draft selection out of Wichita State in 2018.

Other finalists for the NL ROY Award are San Diego infielder Jake Cronenworth, who slashed .285/.354/.477 this season as well as Milwaukee hurler Devin Williams, who sported a 0.33 ERA, a 0.63 WHIP along with a 17.7 K/9 mark in 22 relief appearances.  The winner of the NL Rookie of the Year Award will be announced on Monday, November 9th.