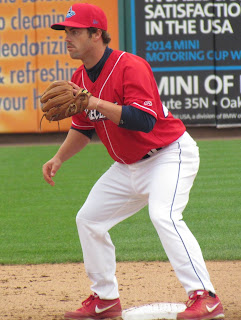 Minor league infielder Tim Zier took part in an interview with me in May of this year while he was a member of the Class A Lakewood BlueClaws. Shortly afterward, the Phillies' 21st round draft selection from 2014 suffered a season-ending injury to his left knee. Prior to being sidelined, the 24-year-old had forced coaches to give him more playing time when he posted a .293 batting average in April.

In the following interview that was unused following Zier's injury, he talks about his early success, growing up as a Padres fan and he takes part in Nine Silly-ass Questions, a segment intended for the PhoulBallz Minor League Podcast.

Read ahead for the full interview.

-I heard from the coaching staff that you're a guy that's really pressing them to get you into the lineup with your output. What are your feelings on the success you've had thus far with Lakewood?

I would say it definitely feels good when I get in there and have some success, especially, not being in there every day. But at the same time, it's such a great venue and it's such a great atmosphere all around that I'm just enjoying every moment of it.

-Is this the first time you've been to New Jersey?

This is the first time I've ever been to New Jersey. Born and raised in San Diego county, California. I definitely had to get used to the weather my first month here, but now I'm really looking forward to summer.

-So I imagine you grew up as a Padres fan. Who were the players who stood out to you as a youngster?

I grew up and I really enjoyed watching Tony Gwynn, who I was fortunate enough to play for (at San Diego State University), for four years. Ken Caminiti comes to mind as well. A couple stand out Padres right there.

-What feedback have you gotten from the coaches here with the BlueClaws?

The feedback is positive. They just tell me to keep on working and keep improving myself offensively and defensively. I am just trying to do everything that's in my control.

-I do a minor league podcast and on that show we have a segment called Nine Silly-ass Questions. Would you participate in that with me?

-Name something that New Jersey is famous for-

-Did you watch the show? What stands out about that show in your mind?

-Being in the Phillies organization, do you know something Philadelphia is famous for?

-If you could have one super power, what would it be and why?

I would have the ability to be invisible.

-What would you do with that invisibility power?

Let's see. I don't want to make it X-rated, so I'll go with my second choice I would probably take as much money as I can.

-What is your favorite candy?

-Do you have a favorite Wesley Snipes movie?

-If you could be featured on one TV show, what would it be?

Probably "Naked and Afraid". It's on the Discovery Channel and you're just thrown in the wilderness and you have to survive for a month.

-Do you have any guilty pleasures?

I like to rock out to some Taylor Swift.