BlueClaws Quotables: Walding and Cozens talk about second half success

By Jay Floyd August 14, 2014
This week I spoke with a pair of solid Class A hitters that have increased their offensive numbers considerably in the second half of the season.

Lakewood third baseman Mitch Walding and outfielder Dylan Cozens have improved quite a bit since the South Atlantic League All-Star break with Walding sporting an OPS that's 255 points higher in his last 49 games than it was in his first 46 games this year, while Cozens has posted an OPS mark 85 points higher than he did before the break.

I asked both players about the uptick in production and more.  Read ahead for those exclusive quotes. 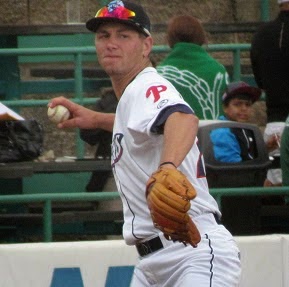 -Walding, the Phillies' 5th round pick in 2011, spoke about what he attributes to his recent success...

You know, at first I was doing some things and I was exactly feeling too comfortable at the plate.  I was kind of struggling really hard with getting pitches and doing some things and I talked with our hitting coordinator (Andy) Tracy and my hitting coach Lino Connell.  We changed some things with my hands, um, changed my approach at the plate and going to get pitches that I wanted to get instead of, kind of- what I was doing was I was being indecisive, waiting to see the pitch and making my decision when the ball was half way and by the time I was making my decision, I was too late, so I was striking out a lot and wasn't hitting the ball the way I should be.  And now I'm attacking pitches and doing things that I want to do at the plate.  Things have turned around a lot.

-Walding, who has tallied a .239 average with six home runs and 51 RBI through 95 games with Lakewood this year, specified what mechanical changes he made in the batters box...

Moving (my hands) down a little bit.  Kind of getting them in a good slot, right above my shoulder.  Just having loose hands, kind of being able to feel my hands work a lot more, 'cause I might drop them if they're too high.  Just kind of moved them down a little bit and staying relaxed with my hands.
-I asked Walding if there's any concern about congestion at his position with Cody Asche and Maikel Franco manning the hot corner at the top levels while Harold Martinez, Zach Green, Jan Hernandez and himself all hold down the same position at the trio of Class A levels...

Obviously, I know there's guys around.  I know that they're there, but I'm not necessarily worried about it.  I think about what I have to do everyday.  You know, I have to go do my best every day and worry about myself.  Obviously, people talk about all the other guys at the same position, but at the end of the day I have to worry about myself and kind of just do what I came here to do and put up good numbers and help my team win.

-The six-foot-three 190-pound Walding offered thoughts on feedback he's received from his coaches in the second half...

They're all pretty happy with the way I've turned things around.  They're starting to see the way I can hit and they way I've changed things.  I know I've been able to hit the ball and stuff.  In the first half I didn't do it so well.  I know what my potential is and I know that I can continue to grow from here even.  And, so I think they're happy with the strides that I've made so far.

-Walding spoke on if there's any additional pressure for an early round draft pick while he's struggling to produce...

I think there's a little bit.  There's definitely a little pressure, you know, if you are a high draft pick.  But, I think at the end of the day, when you put pressure on yourself, it's not because of where you were drafted at, it's more just you know how good you are and...where you want to be.  I think every guy knows that they have the ability to be in the big leagues and that's what I believe in myself.  I know I can be a big league player.  And I think when you go through struggles, it's hard because you know how good you can be and where you should be and when you don't live up to your own expectations, let alone everyone else's, it's definitely tough.  I think my expectations of myself are higher than everyone else's. 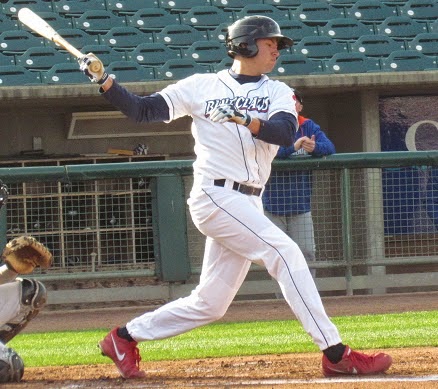 -The soft-spoken Cozens, who was the Phillies' 2nd round draft selection in 2012, shared some insight on what's been the difference for him offensively...

Just staying focused on getting my pitch and not chasing after the stuff that they want me to chase after and just seeing the ball up and taking good swings on it.  Just mental focus.

-Cozens also talked about his level of satisfaction with his season in which he's posted a .251 average with 14 homers, 53 RBI and 19 steals through 118 games for the BlueClaws...

I would say that I'm probably going to never be satisfied, even if I hit .300.  That's just who I am and there's always room for improvement.

-The six-foor-six 235-pound Cozens shared insight on the feedback he has received from coaches as well...

One of their biggest points is finish your work and finish strong.  And they liked how I've progressed through the year and just keep getting better and better. That's the main goal.