Off-season League Updates: Franco Back at First Base, Bastardo Returns to Action

By Jay Floyd November 12, 2013
Throughout the autumn and winter months, we'll have a weekly review of how Phillies players are performing in the various leagues around the globe.  Read ahead for he latest on many familiar names, some top prospects and plenty more. 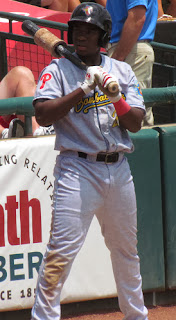 3B Maikel Franco-  The trial of Franco at first base continued as the slugger played his fourth straight game there on Monday.  Franco played eight games at first in the closing weeks of the 2013 regular season with Double-A Reading.  The 21-year-old sports a .328 average with four doubles and seven RBI in 17 games with the Gigantes.  The righty batting Franco had a bust-out 2013, slamming 31 homers and droving in 103 runs in 134 games with Clearwater and Reading this year.

LHP Antonio Bastardo- In two appearances, the 28-year-old has pitched two scoreless innings, striking out four and walking one without surrendering a hit.  In 48 big league games this year, before missing time due to a banned substance suspension, Bastardo had a 3-2 record with two saves and a 2.32 ERA.

Catcher Tommy Joseph- The 22-year-old righty hitter made his season debut with the Estrellas over the weekend, going 1-for-3 with and RBI and a run scored.  Joseph, who was acquired from San Francisco in the Hunter Pence trade last year, missed considerable time with concussion related issues this year and batted .179 in 36 minor league games.

OF Leandro Castro- The 24-year-old is batting .245 with four doubles and six RBI in 16 games with the Estrellas.  In 117 games for Triple-A Lehigh Valley this year, the righty batting Castro tallied a .256 average with eight home runs and 55 RBI.

RHP Luis Garcia- The 26-year-old has tossed three scoreless frames while striking out two and walking three in three appearances for the Estrellas.  In 24 games at three levels this year, Garcia posted a 3.73 ERA and a .237 batting average against.

RHP Hector Neris- In six appearances with the Toros, the 24-year-old right-hander has allowed one earned run in six innings (1.50 ERA) while striking out three and walking four.  Neris had a 6-4 record with a 4.55 ERA and a .241 batting average against in 46 games this year for Reading. 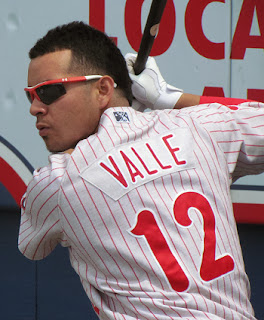 Catcher Sebastian Valle- The righty batting 23-year-old is 2-for-19 in his past eight games for Los Mochis.  Overall in 14 games, Valle is batting .162 with a doubles, a home run and one RBI.  Valle sported a .203 batting average with 12 homers and 41 RBI in 98 games with Double-A Reading this year.

RHP Kenny Giles- The Phils' 7th round pick from 2011 sports a 5.79 ERA and two saves through nine contests with Peoria.  The 23-year-old, threw a scoreless inning in last week's "Fall-Stars" Game out in the AFL as well.  The right-hander missed considerable time during the 2013 regular season with two oblique strains.  Giles posted a 6.31 ERA in 24 games with Class A Advanced Clearwater this year.

OF Cameron Perkins- The 23-year-old has gone 1-for-11 in his last four games.  Overall in 16 games, Perkins sports a .227 average with three doubles, two triples and two RBI.  Perkins was the Phils' 6th round pick in 2012 out of Purdue.  In 103 games with Clearwater this year, the righty batting youngster posted a .295 average with six home runs and 53 RBI. 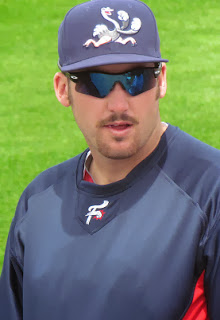 RHP Kyle Simon- Last week, the 23-year-old was scored upon in all three of his outings.  Overall in eight games, Simon has a 2.92 ERA and a .227 batting average against for Peoria.  Simon, who was acquired from the Orioles in the 2012 Jim Thome trade, posted a 2-6 record with a 4.45 ERA and 11 saves in 45 appearances for Double-A Reading this year.

LHP Austin Wright-  The 24-year-old has a 6.52 ERA in nine relief outings.  Right-handed opponents are batting .417 against the youngster while lefty hitters have a .286 mark.  Wright, who was the Phils' 8th round draft pick out of the University of Mississippi in 2011, posted a 6-5 record with a 5.92 ERA in 27 games (16 starts) with Double-A Reading this year.

RHP Mike Nesseth- In his last three appearances, the 25-year-old has allowed 10 earned runs in 5 2/3 innings.  Overall, Nesseth has a 9.95 ERA and a .364 batting average against in eight games.  He has struck out eight and walked seven in 12 2/3 innings for Peoria.  In 48 games at three levels of the minors this year, Nesseth tallied a 1-5 record along with nine saves and a 2.50 ERA.

Infielder Cesar Hernandez-  The 23-year-old switch hitter is batting .263 with four doubles, two homers, 13 RBI and two stolen bases in 21 games for Margarita.  Hernandez batted .289 with five doubles and 10 RBI in 34 games with the Phillies and was honored as a Triple-A All-Star this past season. 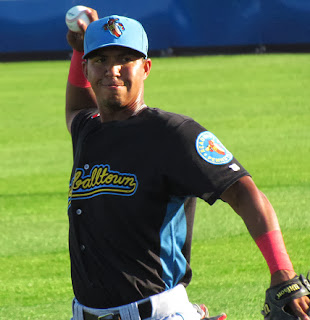 Infielder Edgar Duran- The switch hitting 22-year-old, who is 3-for-9 (.333 avg) with a triple and two RBI in three games, has been rehabbing an undisclosed injury and is expected to return to action this week for Margarita.  Duran hasn't played in a game since October 12th.  In 117 games with Reading this year, Duran posted a .225 average with four homers and 33 RBI.

Shortstop Freddy Galvis- In 15 games the 23-year-old has posted a .339 average with six doubles, one triple, two homers and nine RBI for Zulia.  The switch-hitting Galvis missed some time in the early going with a bicep strain.  Galvis sported a .234 average with six home runs and 19 RBI in 70 big league games this year.

Outfielder Wilmer Oberto- The lefty hitting 20-year-old has no hits in four at bats through four games for Zulia.  Oberto posted a .316 average with six home runs and 45 RBI in 51 games in the rookie level Gulf Coast League this year.

RHP Severino Gonzalez- The 21-year-old, who was honored as the Phils' Paul Owens Award winner this year, has allowed three earned runs in two innings of work in two appearances for La Guaira.  In the regular season, Gonzalez posted a 7-5 record with a 2.00 ERA and a 10.33 K/9 mark in 25 games at three levels.

Catcher Gabriel Lino- The 20-year-old is hitless in two at bats in three games played for Lara.  Lino was the other player, along with Simon, that was acquired from Baltimore for Jim Thome.  The righty batting Lino posted a .254 average with four home runs and 32 RBI in 56 games with Class A short-season Williamsport and Class A Lakewood in 2013.

LHP Cesar Jimenez- The 29-year-old made his Venezuelan League season debut with Lara last week, throwing 2/3 of an inning, striking out two and walking one without giving up a run. In 19 big league games this year, Jimenez posted a 1-1 record along with a 3.71 ERA and a .226 batting average against.